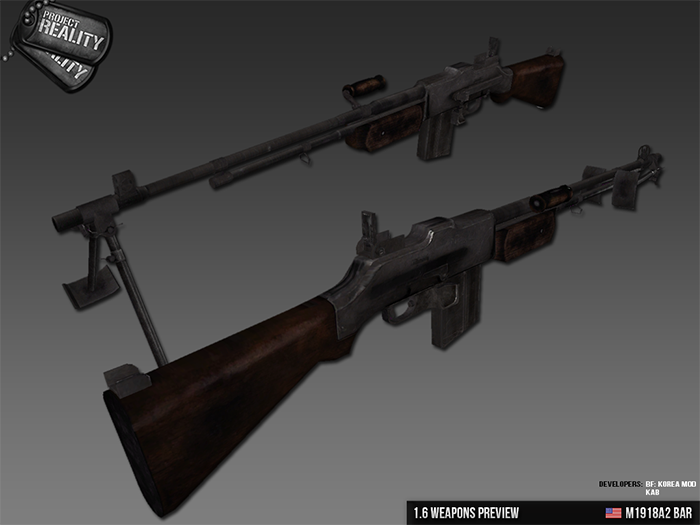 We've been quiet for a while so we thought it was a good idea to break the silence to show what we have in store for the weapons for our WW2 factions you will see in v1.6. While many of these were in previous ALPHA and BETA releases of the WW2-Minimod, they often have been overhauled with new code, animations and sounds. And there are of course also some new ones!

We would like to thank all developers and contributors who helped get these in-game. Not to mention that some of these came from talented artists outside of our team and who gave us permission to use these models. All creators involved are listed on the screenshots below.

You can click on each image to view it in full resolution. Enjoy! 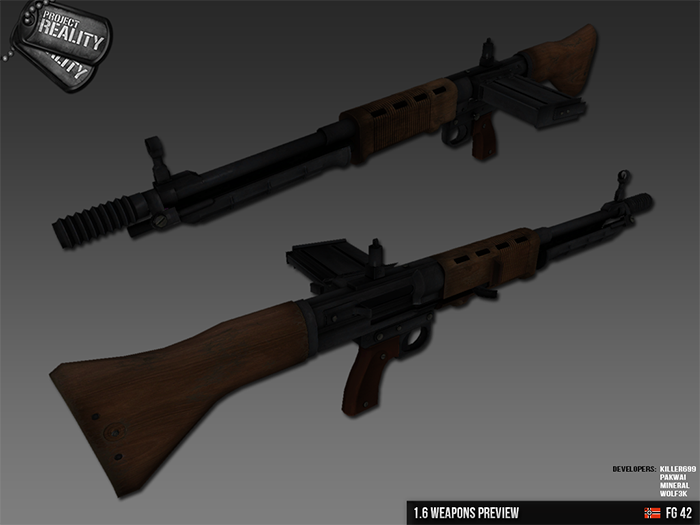 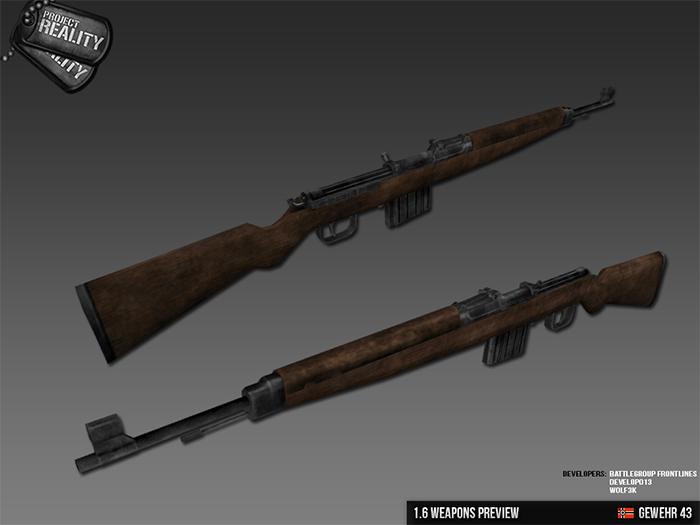 Closing of the BASED Cloud

With this post I am closing the based Cloud. With the last login from 2 years ago by @FlyingR (apart from me) I doubt it will be of any use. It had been outdated for a long time.

The data will still stay on the server and on my local computer. The WotF data will not be erased.

Thanks again to @FFG for doing the dank theme when we set it up initially.

​
First of all, a late welcome to 2019! It will hopefully be another good year for PR:BF2.
Last year saw the release of v1.5 with the Polish forces and also this year we plan a big release! We are still hard at work at v1.6 and it's highly anticipated inclusion of the WW2 factions and maps. We know it's been a long development cycle and while it will take a bit longer still, we wanted to give you all a peak at what's in store for the next release. Not only with work done on the WW2 factions and maps, but also other content additions to PR in general.

Without further delay, here's an updated look of what we've recently finished or are still working on for the release of PR:BF2 v1.6 with WW2 implemented. However, this is by no means all that we have been working on, and only a small sample of what's in store for v1.6! Do note that all of this is still a work in progress and might change before release.

​
Originally created by the Battlegroup42 mod (BF1942 mod team) and brought to the BF2 engine by Anthony and General Bradly, is the M4A3 Sherman tank for the US Forces.

(Click to Enlarge)​
Hey Guys! As part of my grand "Type 21 Frigate" project for PR:Falklands, I needed to make the correct version of the Lynx (the HAS.2) to operate from its flight deck, based off of PR's existing Lynx AH.7 model. This, inevitably, lead to a total update and optimization of the original Lynx AH.7 and in turn the creation of the modern Lynx AH.9A variant of the Lynx.

(Click To Enlarge)​
PR players should all be very well acquainted with the Lynx AH.7 (Army Helicopter Mark 7) since it has been ingame as the British Army's Light Utility Helicopter...
by BASED Bot at 18:24
Continue reading...
Feb 25, 2019

As many of you noticed, for the last few days the website has been offline. This was done as a set of very necessary updates had to be applied. While these were planned a long time ago, we decided to do them now with a higher urgency as right before we took the website offline, we noticed that our forum database had been tampered with. However, at this time we do not believe any data was compromised. No passwords or personal data were acquired.

However, as a precaution and to start the upgraded forum with a fresh start in terms of security for all users, we have reset the passwords for everyone. Meaning you will have to use the password reset system to properly regain access to your account. As always, we recommend to never use the same password on two services and suggest to use a password manager. If you have any trouble getting access back to your account, feel free to contact us on any platform you can find us or use the contact form.

Now what work has been done while the website was offline? You can read a more detailed description of it here. In short the following was done:

​
Welcome community to another 1.5 update. This being a slightly larger one then usual! Let's dive straight into some of the bigger changes of this update.

We have new content in the form of 2 new weapons and a vehicle. The PLA will finally see their PKP placeholder on the machine gunner kit replaced with the Norinco QJY-88 light machine gun. This has been a widely anticipated change to get rid of one of the final placeholders. The IDF also saw their arsenal expanded with the IWI Tavor X95 assault rifle which will be featured on multiple kits. MEC will continue to see their arsenal of vehicles expanded with the AMZ Dzik. Technically this vehicle was already introduced with the Polish Forces but wasn't used on any map. It has now been further reworked and will be used or our MEC Forces as a armored jeep on multiple maps.

The mapping team also has some exciting updates! Route E-106 is finally out of the BETA program, while a new map is being introduced through it: Operation Falcon. A 2x2km map features the Dutch and Russian forces. This new 2x2 km map features a fictional battle between Russia and the Netherlands somewhere in the Baltic region. On the alternative layer the Dutch Armed Forces will fight a pro-Russian Militia.
If you previously installed Operation Falcon for an event, make sure to uninstall before updating to v1.5.5!

Yamalia also saw a heavy rework by entering the winter season. You can read more details about that...
by BASED Bot at 18:26
Continue reading...
Aug 2, 2018

​
One of the featured changes in the upcoming v1.5.5 update is a complete overhaul of the vehicle damage system. In the past, this was very unforgiving for armor crews as it often left your vehicle unable to move after a single hit. This is due to how the current system decides the chance of disabling and what gets disabled. Right now it checks whether to disable parts of the vehicle at two values vehicle health point (HP) values: 50% and 25%.

For example the chances for disabling an APC are:
With that, the focus was on disabling the tracks/wheel often leaving the vehicle unable to retreat. That usually was a death sentence for the crew and vehicle. These numbers were not randomly chosen, but put into place to allow infantry to fight these vehicles effectively without making them die on the first AT hit. However there is another issue with this. Since the disabling can only happen when crossing those 2 HP values, dealing too few damage has no chance of making an impact. This is very obvious on the ATGM vs tank front armor. A full HP tank can take an ATGM to the front and not worry about getting disabled by it.

With those problems in mind we set out to rewrite the entire damage system and change the way disabling gets checked. Now checking for...
by BASED Bot at 19:52
Continue reading...
Jun 17, 2018

​
Hi guys, first of all, thank you so much for your patience over the years. It's been a long time since the beta and we know you're anxiously waiting for updates or better yet, a release date. Unfortunately, the release isn't ready just yet, but we wanted to give you some information about what we're working on. Do note that everything you see here is a work in progress and can change before we release.

With no more delay, here's a peek of what we're preparing for the inclusion of WW2 into PR v1.6.

​
Originally created by the Battlegroup42 mod (BF1942 mod team) and brought to the BF2 engine by Anthony and his team. We plan to implement it into PR alongside other vehicles we could potentially use.

With about 6,400 units produced in 1942 and 1943, the M10 was the most numerous of the American Tank Destroyers of World War 2. Sporting the potent 3 inch M7 anti-aircraft cannon refitted as a tank cannon and the same drive train as the M4 Sherman, it was about as powerful as the aforementioned in terms of offensive capabilities. Its open top turret design however meant the crew was exposed to artillery, shrapnel and rifle fire, whereas its thin armour meant it was quite fragile compared to proper main...
by BASED Bot at 11:07
Continue reading...
Page 1 of 15
XenPorta © Jason Axelrod from 8WAYRUN.COM